Your browser is not Javascript enable or you have turn it off. We recommend you to activate for better security reason
Tongend scoorden we elk weekend enkele losse flodders.

It is getting quite lonely in the Antwerp freakscene. Lately lots of special folks have sadly left us.
Walter was a one of a kind animal, and a one of a kind record dealer, the kind that only had records hardly anyone could afford or knew anything about. He was a living psychedelic encyclopedia. The very first thing i ever heard about Walter, was that he had a mailbox a LP fit into. Any record collector nerd knows the annoying lost pick up notes, and i believe it was a guy that often delivered records at my old apartment that told me about a maniac in Deurne that has a huge mailbox and that i should urgently get one of those mailboxes too.
I did not experience the legendary times Walter worked at Brabo Records, and only visited Soundgarden, the recordstore he ran afterwards, a few times, before we actually became friends. I often rang him up to ask about unfindable records or fanzines, and we also often rang eachother when our mutual pal, who sadly left us a few years ago as well, Tom De Weerdt, when he was not doing well.
Walter ran a distro through a sort of fanzine, hardly over the web. For a while the only information on his website was his phone number. People travelled from Rusiia and Japan to Walter's house to buy unfindable insane records.
Going out with Walter ment he would demand total control over what was being played in the bar we visited. He would hardly play any weirdo stuff, but always go back to The Stooges and The Velvet Underground. He changed Café Witzli Poetzli, before it turned into a tourist trap, into a nuthouse more then once. Throwing cakes around, yelling and singing along. I remember he kept calling the rather annoyed bartender, Daniel Dos Santos, "Dartagnan" and later in the evening "Dartie". Although Dartie wanted to kick him out, he didn't because Walter kept buying the whole bar rounds of drinks, and always tipped over a 100 euro.
I will miss this maniac! 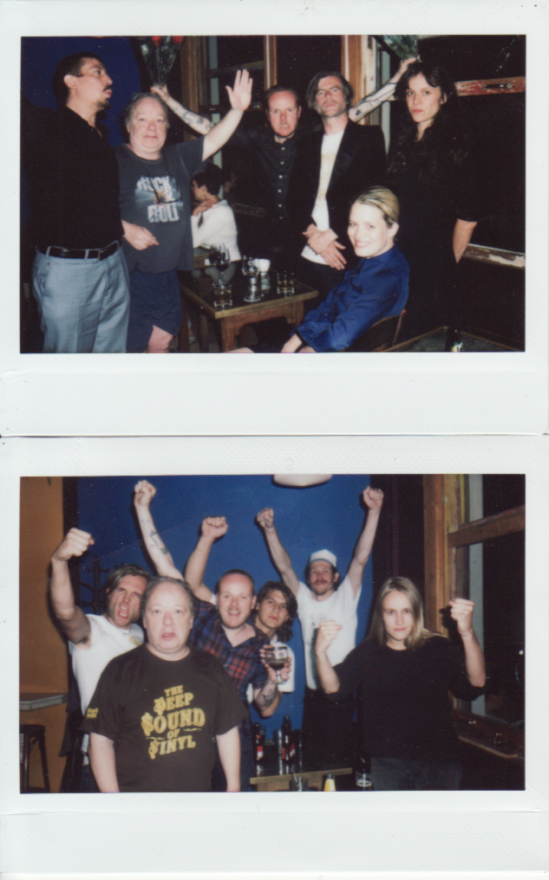 Walter, on both polaroids, second on the left