Your browser is not Javascript enable or you have turn it off. We recommend you to activate for better security reason
Kaas eten van iets

Ich bin ein Wiense Würst again for a few days. Since it is a real city, and although i have been visiting this place since 11 years now quite regulary, it still holds fantastic surprises.
Upon arrival here on Tuesday evening, Albert Mayr took me to the smallest and maybe weirdest circus ever in a old whorehouse. The small place was packed, but normally aparantly nobody shows up. The circus consisted of just three people, "Popo The Clown", a clown that looked like he did his make-up without a mirror, a vocaliste who's name i forgot and a magician named Magic Hans. At first i thought most visitors were taking the piss, but the whole scene was so absurd and ment to be so i think. At some point and pretty much out of nowhere, Albert Mayr was dressed as Santa Claus and on stage as well.. Lots of smiles there.

The day after, I very much enjoyed the exhibition 'Shit Moms', by Tala Madani at Secession. A pretty brutal, hilarious, and quite alien exhibition of paintings and animations by this Iranian artist i did not know before. The usage of light in her work is stunning!

Bram Van Stappen, a photographer that grew up in the same street as i did as a child, happened to be here in Vienna as well, to take photo's of the unshown collection of Narrenturm, a museum for anatomy and the first psychiatric hospital here. Bram gave me a little tour in the unshown part of a collection of body's, bodyparts, gear etc, is not comparable to anything i've ever seen before. Everything there looked like a sleeve for a industrial cassette of the grimmest kind. The round building is a must see as well. 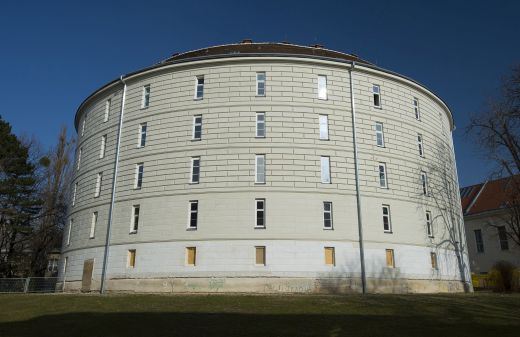 Tomorrow evening i will be playing a piano concert at Alte Schmiede.